Boss Battles Mode is an Unlockable Stadium mode introduced in Super Smash Bros. Brawl, which is very similar to All-Star Mode, except that, rather than fighting all the characters, all the bosses are fought. Boss Battles Mode is unlocked after the player completes both Classic Mode and 'The Subspace Emissary' for the first time, or in other words, has faced each boss other than Crazy Hand at least once. The goal of Boss Battles Mode is to defeat every boss in the game with a single stock, or two characters in its Co-op mode.

When a player begins Boss Battles Mode, they are immediately dropped into combat against a boss. Once the boss is defeated, the player is brought to the rest area. The rest area displays all defeated bosses as trophies, a screen that displays the face of next boss to be fought, and has three Heart Containers (five in Co-op mode), which, like in All-Star, do not reappear even upon later visits to the rest area. This format continues until all bosses are defeated.

However, the player is not allowed to continue after using their stock up, as it is a Stadium Mode. The battles occur in random order, except for the battle with Tabuu, which always occurs last. Each boss has their own Stamina Bar as one would normally fight them in the Subspace Emissary, including both of the Hands. The final three bosses before Tabuu move and attack at a faster rate (most noticeable with Rayquaza and Galleom). The player is treated with a picture of one of the bosses upon completing Boss Battles: this picture varies depending on the difficulty level chosen. Stickers cannot be in Boss Battles.

The battles in this mode include:

There are eight trophies obtained by completing Challenges in Super Smash Bros. Brawl involving Boss Battles Mode. Golden Hammers cannot be used to break them, except in the PAL version.

Differences between the Easier and Harder Difficulties

Boss changes from other modes

Several of the bosses are slightly altered from their appearances in other modes: 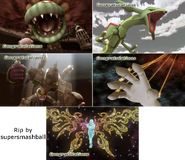 congratulations screens for completing Boss Battles Mode.
Add a photo to this gallery

Retrieved from "https://supersmashbros.fandom.com/wiki/Boss_Battles_Mode?oldid=562679"
Community content is available under CC-BY-SA unless otherwise noted.