One can tap the control stick while doing this move to increase its range, and tilt the stick up or down to aim it towards those directions. If you dodge the Boomerang as it comes back to you, it will continue going, arcing in the direction you dodged in. Link can only have one Boomerang on screen at at time (unless it has been reflected by a perfect shield, Fox's reflector, or Mario's cape (Melee only)); trying the attack again while a boomerang is out only results in Link doing his boomerang throwing animation without actually throwing anything.

Boomerangs have been a staple weapon since the very first The Legend of Zelda game; while weaker than the Bow, it is reusable and capable of pulling items back to Link. The design used in Melee is based on its design in The Legend of Zelda: Ocarina of Time. However, Adult Link in the game couldn't use the Boomerang; only Young Link could.

In Super Smash Bros. Melee (version 1.1), there is a glitch with Link's Boomerang. It causes the Boomerang to get stuck to his arm, causing Link to lose the ability to throw it again.

In Super Smash Bros. Brawl, Link no longer uses the standard Boomerang, but rather, the Gale Boomerang, which pulls enemies towards you as it returns to Link. Toon Link still uses the normal boomerang, though.

The Gale Boomerang has the exactly same use as the normal Boomerang. When it comes back, it additionally drags opponents towards Link. However, when the boomerang is returning it does no damage at all. If used properly, you can string a number of different attacks following the boomerangs retrieving tornado. Link's side standard smash would be the most favorable attack of choice, as it would cancel the knockback allowing the second hit to connect. Link's Down Smash, used with correct timing can also damage opponents with both hits, causing a significantly larger amount of damage (up to 48% charged) Can also throw large items forward and can bring small items toward Link.

If reflected, the Gale Boomerang automatically enters the second phase of its attack, meaning Link cannot be hurt by it, only pushed away by it.

The move can be used to perform Gale Guarding. If timed perfectly, one can literally ride on the Gale Boomerang.

Interestingly, the Gale Boomerang seems to cancel the landing lag from any of Link's aerial attacks if it returns to Link while he is on the ground after an aerial attack, most noticeably, his D-air.

The Boomerang is one of Link's main weapons the The Legend of Zelda series. It is typically used to stun enemies, retrieve items, and trigger switches, making it more of a tool than a true offensive weapon. Some weak enemies could be defeated using the boomerang, and in some games the boomerang was capable of cutting down objects. In The Legend of Zelda: Twilight Princess, the traditional Boomerang is replaced by the Gale Boomerang, which had the ability to summon tornado-like gales. The Gale Boomerang has the same uses as the traditional Boomerangs from the other Zelda games, but the Gale Boomerang could additionally turn fans and put out fires. 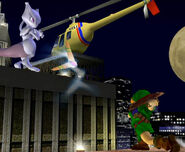 Young Link's boomerang (Melee)
Add a photo to this gallery
Retrieved from "https://supersmashbros.fandom.com/wiki/Boomerang_(move)?oldid=363262"
Community content is available under CC-BY-SA unless otherwise noted.