Smashpedia
Register
Don't have an account?
Sign In
Advertisement
in: Down Special Moves, The Legend of Zelda universe, Special Attacks,
and 6 more

Link's bomb, a character-specific item, can be thrown at other opponents, where it will explode on impact. The character hit by the bomb will take about 6% damage. If the bomb is dropped, then other characters can pick it up and use it as an item. The bomb can also be caught by other characters. When the bomb is flashing red, that indicates that it is about to explode. If a bomb explodes on the character holding it, then they will take a minor amount of damage. As the bomb is an item, Link cannot use the move if he is already holding another item. Link's bomb is unique in the fact that it can deal damage to anyone, including the user's team members. In Ultimate, the bombs must be manually detonated by pressing down special when there is a bomb on the battlefield. 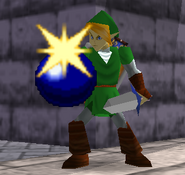 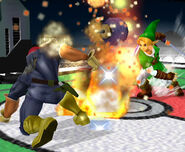 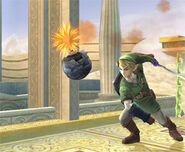 Young Link's bombs are exactly the same as Link's, but they hit multiple times. They also have a slightly different design.

Toon Link's bombs, based on Link's bombs but with a Wind Waker-inspired design, can be thrown at other opponents, where it will explode on impact. The character hit by the bomb will take anywhere from 5% to 9% damage. The blast has a larger radius than Link's and has a more cartoonish appearance to match Toon Link's appearance. If a bomb explodes while a character is holding it, the character holding it and characters in the immediate vicinity will take reduced damage, around 3%. His bombs glow yellow and fluctuate in size to indicate that it is about to explode.

While the bomb has limited capabilities on its own, it can lead into a Quickdraw after a short hop, and can aid in Toon Link's recovery. If the bomb is dropped, other characters can pick it up and use it as an item. It can also be caught and thrown by other characters. Toon Link can also set the bomb on the ground by dropping it right before landing, or right after a ledge jump.

It is interesting to note that while Link's bombs deal damage to breakable terrain such as the towers of Shadow Moses Island, and the floors of the Skyworld, Toon Link's do not. As the bomb is an item, Toon Link cannot use the move if he is already holding another item. Similar to Link, Toon Link's bombs can also damage team members.

Toon Link's Bombs use graphics from The Legend of Zelda: The Wind Waker.

Toon Link about to throw a bomb in Super Smash Bros. Brawl.

The explosion from Toon Link's bombs.

Template:Quote Giant Bomb is one of Link's Down Special Moves that can be used via customization. Link pulls out a huge bomb which causes a big explosion but can't be thrown as far.

The Giant Bomb is a bomb with greater damage and a larger explosion radius; however, the bomb cannot be thrown as far and only explodes after a set time. However, a player that learns this time can throw the bomb with correct timing to ensure it will hit an opponent.

Meteor Bomb is one of Link's Down Special Moves that can be used via customization. Link pulls out a bomb which has a short fuse but can Meteor Smash airborne opponents.

The Meteor Bomb is a great edge-guarding move and killing tool because of it unique ability to meteor smash opponents that are hit with it. Tossing it off the edge to hit an opponent will often result in a kill; placing it on the edge of the stage is a good way to pressure opponents on the edge. The bomb itself is taken out and thrown faster, making it harder for opponents to punish Link during the starting lag of the attack since the lag is greatly reduced. The bomb cannot be used to extend Link's recovery by holding it while using Spin Attack because it will spike Link downwards and kill him when it explodes. The bomb does have a good range behind it though.

Time Bomb is one of Toon Link's Down Special Moves that can be used via customization. The bomb can only explode when its fuse runs out. It gives less damage but higher knockback.

The Time Bomb, despite its many weaknesses, can be a useful move if used correctly. The bomb only explodes after a set time, but if a player can learn this time, they'll be able to hold onto it and throw it at the most opportune moment just before it explodes to ensure it will hit an opponent. Even though it deals less damage, it does have high launch power, so it can be useful for getting opponents off stage and edge-guarding. Dropping the bomb near the edge right after taking it out can pressure recovering opponents as well. It has a small radius on the explosion, so it will have to be timed correctly.

Short-Fuse Bomb is one of Toon Link's Down Special Moves that can be used via customization. Toon Link pulls out a bomb with a very short fuse, but which has a powerful blast and can launch opponents upward.

The Short-Fuse Bomb has some good uses if a player is able to employ it correctly. It has a very short fuse, so Toon Link should throw it immediately and only pull it out when it is needed right in that moment, otherwise the bomb will explode before it gets near the opponent or might explode in Toon Link's hands and hurt him instead. It has a large explosion, which can help with the range problem; jumping and throwing it at the ground and then fast-falling into the smoke can provide Toon Link with some cover for a brief time; if a player chooses to do this, equip the High-Speed Boomerang so that Toon Link can hit approaching opponents with a projectile before the smoke clears. The bomb also launches upwards upon exploding, so it can be used for juggling as well.

Bombs can also be used to setup Link's spike. When a bomb is thrown on an airborne opponent under him, the opponent will be stunned, allowing for Link to spike them.

If the A button is held during an animation where Link/Young Link/Toon Link cannot throw his bomb (such as during a roll, or during the time when he takes out the bomb), it will allow the player to do a Forward Smash with the c-stick without throwing the bomb. The bomb can then be thrown after the smash, stunning the opponent and setting the opponent up for a dash attack, Slide Smash, or a dash attack cancel.

In Brawl, if a Bomb explodes while in knockback, it increases the knockback Link and Toon Link travel. However, if Link or Toon Link use their Zair right before it explodes while in knockback (other than the knockback of the Bomb), it cancels all knockback allowing them to survive at percents they'd usually get KO'd for that move. However, it is very situational because it takes 7 seconds for a Bomb to explode and the attack that knocks them has a chance of making them dropping the Bomb. Without Link or Toon Link having a way to force the bomb to explode, there's rarely a chance of pulling it off with a result of surviving longer. This video shows this technique.