Bob-omb from Super Smash Bros. for Nintendo 3DS and Wii U.

Upon appearing, the Bob-omb can be picked up by any fighter and thrown. The Bob-omb will flash red when it is about to explode in the user's hand, and will damage them if not thrown in time. If it is not picked up for some time, the Bob-omb will walk around the stage, and explode upon making contact with a fighter.

The Bob-omb deals 31% damage in SSB and 25% damage in subsequent titles when exploding on its own, and deals 36% damage in SSB, 25% damage in Melee, and 32% damage in Brawl and SSBWU/3DS when thrown. Because of its damage and high knockback, the Bob-omb is one of the most powerful items in the series, easily KO'ing opponents at mid-percentage. However, due to the splash damage the thrower must take care and not be too close, as it can be easy for them to take damage and be KO'd. When thrown at an airborne enemy, the target is Meteor Smashed very powerfully.

The Party Ball has a 12% chance of just dropping Bob-ombs. Bob-ombs will also fall onto the stage to speed up a Sudden Death match.

These little guys are just what they appear to be: walking bombs. Pick one up and hurl it for an incredibly potent attack. If no one picks them up, Bob-ombs light their own fuses and start wandering around armed and dangerous. In Super Mario 64, Bob-ombs chased Mario down once they noticed him. Pink Bob-ombs are nice and capable of speech.

A mobile bomb with a fuse on its head. It can be picked up and thrown as a powerful explosive, but if no one grabs it, it will tire of waiting and start wandering, then detonate whenever it likes. Its power and unpredictability make it an accident waiting to happen. In sudden-death matches that go on too long, Bob-ombs rain from the sky to move things along.

This enemy lacks any kind of subtlety--a fuse on its head, a slowly turning key in the back, and two short legs to carry its little bomb body. You can figure out what happens next. When a Bob-omb starts flashing, you better start running!

Bob-ombs are enemies in the Mario series, and first appears in Super Mario Bros. 2, where they walk around and explode after a short time, though their self-destruction can be delayed by jumping on it (which cannot be done in Smash Bros.). The ability to pick up Bob-ombs also originates from the same game.

A bob-omb struggling for dear life.

Peach being launched by Bob-omb explosion. 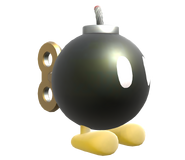