Blizzard is the Ice Climbers' Down Special Move. The controlled Ice Climber stays put on the ground and shoots out a stream of frigid air from the palm of its outstretched hand for about a second to damage opponents in front.

The Ice Climbers using Blizzard in midair in Brawl. 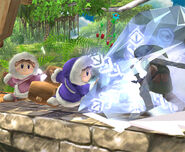 There is a chance the opponent gets frozen with this move when they have a high percentage.
Community content is available under CC-BY-SA unless otherwise noted.
Advertisement