Blazer is Roy's Up Special Move. Roy performs an upward slash while setting the Sword of Seals ablaze.

Blazer functions similarly to Dolphin Slash, as it propels Roy upwards while attacking. However, Roy sets the Sword of Seals ablaze, which hits multiple times and deals fiery damage, and the distance gained is roughly half of the distance gained from Dolphin Slash. In addition, by tilting the control stick forwards or backwards, Roy goes in a diagonall direction, increasing its horizontal distance at the cost of vertical distance. Blazer also grants Super Armor at startup when on the ground.

In Super Smash Bros. for Nintendo 3DS and Wii U, Blazer propels Roy less distance vertically, but compensates by dealing more damage and is more reliable for connecting each hit. In addition, it grants more horizontal distance at the peak of the move, improving its recovery potential. Roy now holds the Sword of Seals in a reverse grip when performing Blazer.

Blazer is Roy's sole recovery option, but is mediocre when compared to Dolphin Slash due gaining half the distance. However, because of its ability to be aimed diagonally, it grants more horizontal movement, allowing Roy to recover from horizontally farther distances than Marth/Lucina. Offensively, Blazer is a powerful out of shield option, can reliably connect with most moves, and can KO at 110%. 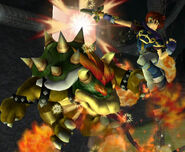 Blazer in Super Smash Bros. for Wii U.
Add a photo to this gallery
Retrieved from "https://supersmashbros.fandom.com/wiki/Blazer?oldid=542560"
Community content is available under CC-BY-SA unless otherwise noted.