Blastoise, also known as Kamex (カメックス, Kamekkusu?) in Japan, Turtank (French), and Turtok (German), is a fictional creature in the Pokémon media franchise. Blastoise's pre-evolution, Squirtle, is playable in Brawl and is a trophy in Melee.

Blastoise makes its first appearances as a Poké Ball Pokémon in Super Smash Bros. Blastoise uses Hydro Pump as its attack. It stations itself on the stage and starts firing blasts of water from the cannons on its back. Any character that makes contacts with the blasts of water will take moderate damage. The character will also be pushed towards the side of the screen. Characters that are on the other side of Blastoise will not be affected unless that person makes contact with Blastoise itself, which will then take moderate to high damage. Blastoise also moves back slightly for each blast of water, and can fall off the stage.

Blastoise makes an appearance again as a Poké Ball Pokémon in Super Smash Bros. Melee. Blastoise's attack is identical to the attack it uses in Super Smash Bros., using Hydro Pump to push opponents off of the stage. Oddly, computer-controlled Fox and Falco try to reflect the water blasts, although they are too powerful to be reflected. Other CPU controlled characters will try to counter the attack with their shields as well.

Blastoise features as a collectible trophy, unlocked as one of the 100+ trophies that can be collected randomly during normal play, such as in the Trophy Lottery and throughout the various Single-player Regular Matches. It reads as follows:

Blastoise is the next evolutionary step from Wartortle. The thick jets of water they shoot from the cannons on their backs are strong enough to cut through steel plating. When in danger, they hide inside their armored shells. Blastoise is so popular among trainers it's considered the definitive water type.

NA: On a hot summer day, it's great to cool off by playing in a sprinkler. Don't look to Blastoise as a replacement, though--those water jets on its back are extremely powerful and would send you flying. In fact, Blastoise itself is so huge so it doesn't get blown away when it fires. Speaking of fires, Blastoise is better than a fire truck at putting them out!

PAL: Tempted to have a Blastoise hose the mud off your bike? Well, don't. The water jets from its rocket cannons might look perfect for that, but they'd just blast your bike into oblivion. In fact, the reason Blastoise grow so big and heavy is so they don't get blown away themselves. If your house is on fire, though, feel free to get a Blastoise to help!

NA: Some species of Pokemon living in Kalos have the ability to Mega Evolve, and here's one! Mega Blastoise is a bit bigger than Blastoise, and instead of two cannons on its shell it has one huge cannon. This may seem like a downgrade, but wait--there are two on its arms! This math is easy: three is better than two.

PAL: Some species of Pokémon living in Kalos have the ability to Mega Evolve, and here's one! Mega Blastoise is a bit bigger than Blastoise, and instead of two cannons on its shell, it has one huge cannon. This may seem like a downgrade, but wait - there are two on its arms, too! Basic arithmetic: three is better than two. 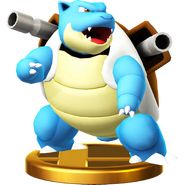 Blastoise's Trophy in Super Smash Bros. for Wii U 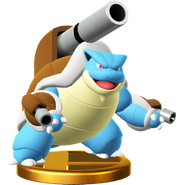 Blastoise's Trophy in Super Smash Bros. for Wii U
Add a photo to this gallery

Retrieved from "https://supersmashbros.fandom.com/wiki/Blastoise?oldid=547435"
Community content is available under CC-BY-SA unless otherwise noted.