Blaster (called Blaster Shot in Super Smash Bros.) is Fox's, Falco's, and Wolf's Neutral Special Move. The attack consists of firing shots from a laser gun to damage far away opponents. All three fighters have different variations of the Blaster.

In Super Smash Bros., the Blaster shoots a pink laser beam that travels slower than a standard Ray Gun shot, does 5-6% damage, and has good knockback for how quick it is. The Blaster has increased fire rate while Fox is airborne, allowing Fox to short hop double laser. Overall, Fox is considered to have the best projectile in Super Smash Bros. due to its hitstun and damage. This is one of the main points for why Fox is such a high tier in the original.

In Super Smash Bros. Melee, however, Fox's Blaster is quite different from the original; it has a faster rate of fire and traveling speed is drastically increased, but the Blaster has absolutely no knockback or hitstun and does 1-3% damage per shot. This is one of the few moves in the game that can never, under any circumstances, provide a KO (except for stealing other players' KO's). It is mainly used from long range (As short hop lasers or short hop double lasers) to camp and help bring up damage for an Up Throw to Up Air combo or an Up Smash. It should never be used while standing as there is ending lag. It should be noted the shots in Fox's up, down and back throws do no knockback or hitstun either.

In Super Smash Bros. Brawl, Fox's Blaster has once again changed: the range of the Blaster now travels roughly half of its previous distance, and he cannot cancel the lag of putting his Blaster away simply by landing. His Blaster inflicts 3% damage per shot before move decay sets in. Fox is also now capable of a short hop triple laser, allowing him to inflict more damage on opponents who are falling to the stage. It is similar to Melee's version in extent to what it can be used, as it is mostly used to camp. It is also used after auto-canceled aerials to reduce landing lag, and usually after F-Airs, or after jumping up from the ledge.

In Super Smash Bros. for Nintendo 3DS/Wii U, Fox's Blaster has less utility, being incapable of auto-cancelling (essentially creating more ending lag), and only firing two lasers in a short hop. Blaster travels the same range as it did in Brawl. 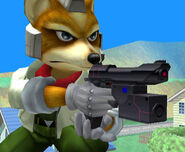 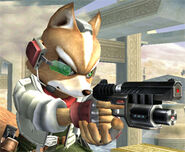 A close view of Fox's Blaster in Super Smash Bros. for Wii U.
Add a photo to this gallery

Impact Blaster is one of Fox's Neutral Special Moves that can be used through customization. This attack fires slower lasers that deal damage and knock opponents back.

Charge Blaster is one of Fox's Neutral Special Moves that can be used via customization. Fox can charge up to fire a single, powerful laser. It's slow but deals a lot of damage.

Charge Blaster
Add a photo to this gallery

Blaster is Falco's Neutral Special Move in Super Smash Bros. Melee and Super Smash Bros. Brawl, which, like Fox, shoots a laser gun to damage faraway opponents. It is significantly different from that of Fox's: it has a slower firing rate and longer end lag (though it fires faster in the air, but not as fast as Fox's), and each beam stuns the opponent, in addition to doing damage. Falco's Blaster closely resembles Fox's Blaster as it appeared in the original Super Smash Bros. The end lag can be skipped if used during a short hop. Falco's Blaster is mainly used from long range to help build damage for later KO attempts, and as an aid in approaching. It has set knockback. It is also used for setting up K.Os, especially versus Captain Falcon and Ganondorf, as it can be fired numerous times off the ledge to force these characters to recover the same way each time. Said knockback also applies to his up, down and back throws, making them more powerful somewhat than Fox's, though with more better killing potential.

In Super Smash Bros. Brawl, the beams from Falco's Blaster travel farther than the beams from Fox's, and they are blue instead of red. They appear to do some electricity-based damage, and do not appear to have set knockback. They are very similar to Fox's lasers from Super Smash Bros. outside of doing less damage. It is considered to be one of the best projectiles in the game, as it has transcendent priority, and disrupts the approach of a majority of the cast. This is done by exploiting short hop double lasers to shoot one laser in the air and one in the ground. Combined with Falco Phantasm and throws, this is a common Falco approach. It can also be used to Lock commonly after a Jab Cancel, and can "combo" at various percents into a DACUS or a Forward Smash Attack. Also, similar to Super Smash Bros. Melee (but to a lesser extent), Falco's lasers can also be used to set up edgeguards.

In Super Smash Bros. for Nintendo 3DS/Wii U, Blaster has been severely nerfed, having more landing lag (essentially removing the move's ability to auto-cancel) and now being slower than it was in Brawl. In addition, the removal of DACUS and Laser Lock make the usefulness of Blaster questionable. Falco still uses his Blaster for his throws, but can no longer chaingrab due to its removal in the game. 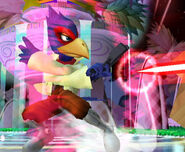 A closer view of Falco's Blaster in Super Smash Bros. for Wii U.
Add a photo to this gallery

A small glitch with Falco's Blaster. If used at the right range, the shots will stick into some platforms and remain damaging until it vanishes. It can most easily be done on New Pork City (or any custom stage with a specific type of ramp), when standing where the bridge begins, and firing at the platform to the left. It can also be done in Super Smash Bros. Brawl's Temple, on the ramp to the far upper-right of the stage, if standing in a certain spot and firing, and in Corneria if the player stands on the engines, jumps and fires at the tip of the wing.

Characters can become trapped in a tumble animation, called Laser Lock, if hit repeatedly with Falco's Blaster just before they hit the ground while free-falling. The Laser Lock may also be done after a Down Air Attack by Falco towards the ground if the opponent does not roll off the floor. The laser lock does not work on all characters. The thinner characters will lie under the laser just barely.

Explosive Blaster is one of Falco's Neutral Special Moves that can be used through customization. Falco fires a shot that slows down as it travels and explodes just before it stops.

Burst Blaster is one of Falco's Neutral Special Moves that can be used via customization. Falco fires faster shots, but the power and range are decreased.

...and the resulting explosion.

Burst Blaster
Add a photo to this gallery

Blaster (Japanese: Claw Blaster - クローブラスター, Kurō Burasutā) is Wolf's Neutral Special Move in Super Smash Bros. Brawl. It is a gun with a bayonet attached beneath its barrel, that fires green projectile lasers. Its firing rate is much slower than that of Fox and Falco's counterpart weapons, as Wolf is animated drawing and holstering it for each shot, and its range is the shortest, with lasers that travel about two-thirds of the length of Final Destination. However, its shots deal a small amount of knockback that is not set, and 5-6% damage, the most damage of all three blasters. The blaster itself also serves as a melee weapon (due to the aforementioned bayonet), delivering an extra 5% damage and considerable knockback to foes if it contacts them. When fired from the ground, the vertical range of the lasers' hitboxes make contact with the floor. As such, it will hit any ducking or crawling opponent, and even detonate any landmines that Snake may have laid. It should be noted that the damage dealt by each laser lessens slightly as it travels forward. Wolf is also the only one of the three to not use his blaster in any of his throws.

A closer view of Wolf's Blaster in Super Smash Bros. Brawl.
Add a photo to this gallery

Fox uses a blaster in Star Fox 64's multiplayer and is depicted with one in artwork and screenshots. Falco, Slippy, and Peppy also use blasters in the game's multiplayer while on the ground. While the blaster wasn't an official weapon in every Star Fox game up until Star Fox: Assault, it, like the Reflector (which is Smash Bros.-exclusive) was popularized outside of the Star Fox series in all three Super Smash Bros. games. In every game, Fox's blaster design seems to be identical to the one used in Star Fox 64, despite its upgraded appearance in Assault. Wolf's blaster is also an example of a Super Smash Bros.-exclusive weapon inspired by weapons in older Star Fox games.

Retrieved from "https://supersmashbros.fandom.com/wiki/Blaster?oldid=592474"
Community content is available under CC-BY-SA unless otherwise noted.