Junji Majima
Black Knight (whose real name is Zelgius) is a character that appears in the Fire Emblem series.

The Black Knight serves as one of the major antagonist in the Tellius sub-series of the Fire Emblem series. In Path of Radiance, he appears as a mysterious armor-clad figure wielding the divine sword Alondite, and serves as one of Daein's Four Riders and was the most powerful general during the Mad King's War under Daein's ruler Ashnard. The Black Knight also serves as Ike's main foe, as the former was responsible for the death of Ike's father Greil, which gives Ike the motivation to fight. The Black Knight is often seen throughout the game orchestrating numerous events at the behest of Ashnard, and would come to engage Ike numerous times, with the latter failing to best him due to his armor. Eventually, the two confront one another at Nados Castle, with Ike successfully besting him and escaping before the castle crumbles, leaving his fate to be presumed dead at the end of the game.

One of Daein's Four Riders and wielder of the blessed sword Ettard. Once an apprentice to Ike's father, Greil, the two eventually duel, resulting in Greil's defeat. Thought to be dead after losing to Ike and the blessed sword Ragnell, the Black Knight survives and comes to the aid of Micaiah, the leader of the Dawn Brigade, a band of Daein freedom fighters.

The Black Knight appears exclusively in Super Smash Bros. for Nintendo Wii U as a Trophy and in Smash Tour. In both games, the Black Knight is referenced as one of Mii Swordfighter's costume. 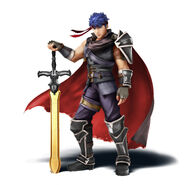 In Smash Tour, the Black Knight is a red item. A player using the Black Knight at the beginning of a battle will cause their smash attacks to occasionally have one-hit KO power at random for that battle.

Not even the other members of the Daein army know the truth behind this dark knight. He is Ike's rival in Path of Radiance and the sequel, Radiant Dawn. His mastery skill Eclipse is so incredibly powerful, it'd be understandable if you thought his defeat would bring peace to the war-torn land.

In Super Smash Bros. Ultimate, the Black Night appears as an Assist Trophy, being revealed in the November Direct. He moves slowly, but when the opponents are close enough, he strikes the opponents down with his powerful sword Alondite, with a successful attack being indicated by the Special Zoom and launching them with high knockack and damage. The Black Knight may also warp occasionally toward distant foes to make up for his slow mobility, and possesses super armor against the majority of attacks, making him very difficult to defeat. He is voiced by Robert Cloutworthy and Junji Majima respectively, though through voice clips reused from Fire Emblem Heroes.

The Black Knight also appears as a Spirit, and can be obtained from the Spirit Board or if the Zelgius Spirit is enhanced. 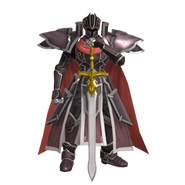 Black Knight in Mushroomy Kingdom
Add a photo to this gallery
Retrieved from "https://supersmashbros.fandom.com/wiki/Black_Knight?oldid=589541"
Community content is available under CC-BY-SA unless otherwise noted.