Unknown
Bewear (キテルグマ, Bewear? Kiteruguma in Japan) is one of the Pokémon that is set to appear from a Poké Ball in Super Smash Bros. Ultimate.

When Bewear is summoned, it will attack players using a Sky Uppercut. Bewear walks and jumps around the stage, attacking with an uppercut that deals two hits, 18% and 24.4% of damage respectively. This attack deals upward knockback.

Bewear also has a spirit.

Bewear is a Generation VII, Normal/Fighting type Pokémon that originated from the Alola region on Poni Island. This Pokémon is immensely powerful however it is somewhat unaware of this strength as it hugs trainers to the point of death 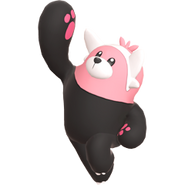