Beta Elements are components of the Super Smash Bros. series that, for whatever reason, are removed or altered before that game is released. Known info about beta elements usually comes from one of two sources. The first is information released about a game, by its creators, before the game is complete. The second is data found within the coding of a game that serves no purpose, but could have been implemented into the game at one point.

Super Smash Bros. was initially developed by Masahiro Sakurai and Satoru Iwata in their downtime, in a form titled 格闘ゲーム竜王 (Kakuto-Gēmu Ryūō, or Dragon King: The Fighting Game), which lacked Nintendo characters. Sakurai, however, felt that the game could not provide the proper atmosphere on a home console without Nintendo characters, and they were soon added and the game was renamed.[1]

In the final game, two beta Kirby stages are only playable with a GameShark. The stages have strange elements, such as invisible barriers. A working Dream Land stage can be viewed in the "How to Play" tutorial, which itself can be seen by waiting on the title screen. Also, in the character select, the question mark boxes were supposed to be colored and Saffron City also had pink with purple on the rooftop. During the opening sequence, Master Hand tranforms a desk into a mysterious stage similar to Peach's Castle, unlike this one, this stage is unplayable and doesn't appear in any moment on the whole game. Also Bowser, Mewtwo, Pit, King Dedede, Princess Peach and Meowth were supposed to be playable in this game.

Also, according to a recent talk between Masahiro Sakurai and Satoru Iwata, Sakurai revealed he intented to add the Final Smashes in this game; with the proof he already had the voices effects when the characters uses their Final Smash, but for some limitations the Final Smash had to wait 9 years until the launch of Brawl.[2]

Saffron City with a pink/purple rooftop.

A beta version of Dream Land in the game's coding. The green Luigi is standing, preparing to run, on the invisible barrier.

The different Peach's Castle in the game's opening sequence.

Dream Land, with taller grass and darker leaves.
Add a photo to this gallery

Through an Action Replay, a large, gray stage with the background appearing to be some kind of pub, is accessible. The music is the same as used on Fox and Falco's stage Corneria. This is assumed to be a test stage because of its name, which on the debug menu is TEST. There are also four stages, named AKANEIA (a possible predecessor to Castle Siege from Super Smash Bros. Brawl, a homeworld for the Fire Emblem series), 10-2, IceTop (a possible precursor to the Summit stage from the sequel, which belongs to the Ice Climbers), and DUMMY; all four freeze when accessed normally, though 10-2, IceTop and DUMMY can be accessed with other cheats, while AKANEIA remains inaccessable to this day. In addition to this, the entire Debug Menu, which was used in pre-release testing, can be used when the game is hacked, allowing for complete editing of anything in the game. Giga Bowser, both male and female Fighting Wire Frames, Master Hand, Crazy Hand, and even Sandbag are all playable (to a limited extent) via the Debug Menu.

Early screenshots showed the Motion-Sensor Bomb to be much different; these screenshots actually showed it to be a Proximity Mine from Perfect Dark rather than the Motion-Sensor Bomb from "TOP SECRET" (actually GoldenEye 007) that appeared in the final game. A screenshot of this Proximity Mine's trophy has also been released, and this screenshot shows that (in an almost cheap manner) the text in the Proximity Mine trophy was only tampered minorly (with only a few removals of references to Perfect Dark) for the final Motion-Sensor Bomb trophy. Why the Perfect Dark Proximity Mine was changed to a GoldenEye 007 Motion-Sensor Bomb remains unknown to this day and is rather ridiculous, especially considering that the games from which the items originated were even made by the same company, although the fact that Nintendo hides the Motion-Sensor Bomb's trophy's debuting game entry with the words "TOP SECRET" in the final game suggest that the item change may very well have had to do with copyright infringement. The Temple stage originally had an elevator that led to the bottom of the stage, and had a fixed appearance. Players could also could walk through the laboratory in Great Bay. Stages Yoshi's Island and Kingdom had different designs altogether; the former was larger and had more blocks, while the latter looked more similar to the Mushroom Kingdom of the previous game. Early images of Pokémon Stadium shows different element icons in the background screen, which looked more alike the icons of the Pokémon Trading Game Cards. Onett's music also sounded different.

Super Smash Bros. Melee's beta Motion-Sensor Bomb's trophy. This happens to be what the Sensor Bomb looks like in the Japanese version of the game, but reasons on the change on the North American version are unknown. 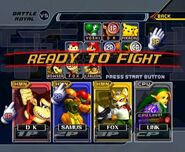 The old character-selection screen before the final version of the game. Note that Kirby, Peach, Zelda, and Ice Climbers are missing. 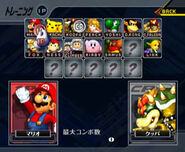 Zelda missing in this picture from the Japan website

Two platforms from the Temple stage that appear in the Special Movie but not during gameplay.

A different fire image appear in the background of Pokémon Stadium.

Yoshi's Island with 5 much smaller blocks 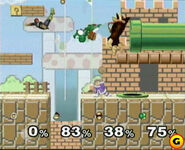 Mushroom Kingdom's First design
Add a photo to this gallery

Some of the game world icons were initially the same as in the previous two games, but they were revised as time went on (Mario's Mushroom icon was refined and given spots, the Poké Ball icon has the top half colored in to properly represent how it is usually red, etc.). Also, the description for the My Music options originally said, "Adjust how often a song will appear on this stage." It has since been revised in a general tone to say, "Adjust how often songs appear on stages." Along with this, one piece of music that was planned for the Delfino Plaza stage was later moved to Luigi's Mansion. Solid Snake was also meant to be more muscular, and was to have a gray suit rather than blue; along with this, his down smash mine looked different. Wario Bike, Drill Rush, Summit, Halberd, Rainbow Cruise, and "The Flowers That Bloom in the Echoes" were originally called Wario Chopper, Triple Dash, The Summit, Battleship Halberd, Rainbow Ride, and, "Flowers Bloom on the Notes" respectively. It's unknown why they changed these names, however, they likely changed Rainbow Ride because it was a Melee stage, in which it was misnamed Rainbow Cruise (although it remains Rainbow Ride in the PAL regeions, mostly because it was called Rainbow Ride on the PAL version of Melee). Lastly, there were scenes taking place before the events of the Subspace Emissary where the Subspace Army takes over the Halberd and King Dedede unintentionally stalls Meta Knight from preventing it from happening. Masahiro Sakurai confirmed that he decided to cut this out and an update was made to confirm this together with how various events and characters in the Subspace Emissary comes together. Also Mario instead of Kirby was the one seen fighting Petey Piranha in one of the Super Smash Bros. Brawl TV spots.

Another beta element in Brawl was Kirby's Hammer move. In mid-air when you use hammer in SSBM, you do a vertical spin, but in SSBB, however, he does a horizontal spin; this was seen in the first trailer, where he does the former. In the second trailer, when Fox appears, he has his Blaster in his hand during the whole battle despite the fact in the final release he only uses the blster when using his standard special move.

Also, unused files for Dixie Kong, Toon Zelda, Toon Sheik, and "Pra_Mai" (speculated to be Plusle & Minun of Pokémon fame) were found as scrapped newcomers. There were also files for Dr. Mario, Mewtwo, and Roy, possibly meaning that they were planned to be brought back at one time, or that their data was imported for some reason. A scrapped Assist Trophy for Ridley was also found. It was most likely scrapped in favor of a Boss version of Ridley.[3] Donkey Kong and Diddy Kong had a early trophy before they had the one in the game.[4] In the E3 2006 Trailer, Many minor differences to the final version were seen. One of which was Mario's Up-A, being slightly faster than the old version. 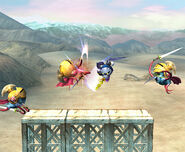 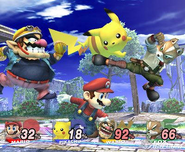 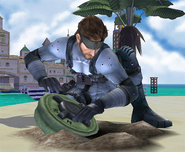 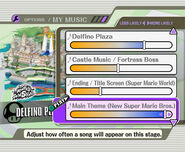 A beta version of Delfino Plaza's My Music with a song later moved to Luigi's Mansion. 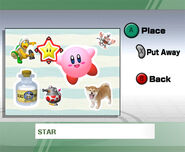 A beta version of the sticker album.

Fox with his Blaster in his hand, as seen in the E3 trailer.

In the Tokyo vs Kyoto video on the DOJO!!, which was the first full match that was shown there, there were several minor differences from the released version. One example of this is Samus's Zero Laser, which lasts about 2 seconds longer in the video.
Add a photo to this gallery

Retrieved from "https://supersmashbros.fandom.com/wiki/Beta_Elements?oldid=286301"
Community content is available under CC-BY-SA unless otherwise noted.