Belay is the Ice Climbers' Up Special Move. The controlled Ice Climber throws the CPU one up a short distance while the two are attached by a rope, and the CPU Ice Climber will then send the human one a long way upwards by pulling on the rope, and both will enter the helpless state until they land, making them individually vulnerable until then.

It functions as a third jump, but only if the CPU-controlled Ice Climber is present. If this move is used to recover from falling off the edge of a stage, the CPU Ice Climber will likely fall to its doom while the human one will land on the stage safely.

Without the other Ice Climber alive or near enough in the air, the player merely does the motion for the move, which will still grab the ledge when close enough, but gains very little altitude and leaves the Climber helpless to fall. A separated CPU Climber may also use the move alone to try and get back to their partner. Players typically use Squall Hammer-based recoveries when left with a single Climber.

In Super Smash Bros. Brawl, the AI Climber will aim for and grab the ledge of the stage provided they are facing toward the ledge, and will then pull up the human controlled Climber, acting as a Tether Recovery. As both Climbers can now grab the ledge simultaneously, this effectively eliminates the problem of potentially being edgehogged by the partner. 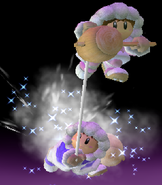 Belay with both climbers in Melee.

Popo using Belay in Brawl.
Add a photo to this gallery

A technique using this move (known as Bungie Jumping) allows a player to edge-hog for an extended period of time with invincibility frames that can be repeatedly attained. The technique also sets up to chaingrab any opponents who get past the edge-hog.

Retrieved from "https://supersmashbros.fandom.com/wiki/Belay?oldid=592461"
Community content is available under CC-BY-SA unless otherwise noted.