Super Smash Bros. for Nintendo 3DS and Wii U Edit

When Ganondorf uses his Final Smash in Super Smash Bros. Ultimate, he transforms into his Legend of Zelda: Ocarina of Time incarnation where he has two swords and is bipedal. When he transforms, he slashes with his sword dealing 10% damage and either Meteor Smashing or stunning the opponent. He then dashes forward accross the entire screen dealing 45% of damage to anybody caught in his range. After the charge, Ganondorf will reappear at the place where the Final Smash was activated. In total it deals 55% damage, 5% less than in Super Smash Bros. for Nintendo 3DS and Wii U. Depending on whether the target is offstage and lower down in comparison to Ganon’s sword, the target will either be hit by Ganon during the slow motion effect, or be Meteor Smashed. The charge can be used as a ranged tool to take out recovering enemies next to the blast lines, as it has heavy knockback and a very large hitbox.

Ganon is a boss in Classic Mode and Adventure Mode: World of Light, as a servant of Dharkon in the latter. 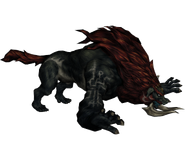 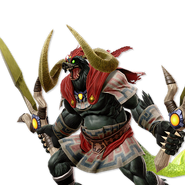 Retrieved from "https://supersmashbros.fandom.com/wiki/Beast_Ganon?oldid=592462"
Community content is available under CC-BY-SA unless otherwise noted.