The Beam Sword from Super Smash Bros. for Nintendo 3DS and Wii U.

The Beam Sword (ビームソード, Bīmu Sōdo?) is a long-range clobbering item. Available and appearing from within the Super Smash Bros. series, it can be wielded and charged for melee attacks or can even be thrown. The length of the Beam Sword in Melee and Brawl changes depending on the character wielding it and the intensity of the attack performed with the beam sword's smash attack generally having the longest range of all beam sword strikes. In Melee and Brawl, it is possible for Peach to pull out a Beam Sword with her Vegetable attack, but this is incredibly rare.

Differences between Melee and BrawlEdit

"With its distinctive glowing blade, the Beam Sword is eye-catching and lethal. At first, the blade is about the size of a short sword, but the length changes depending on who wields it. The blade also lengthens in direct proportion to the power of an attack, so it reaches its maximum size when swung as a smash attack."

A sword with a blade of glowing energy. The length of the blade changes depending on the fighting spirit of the wielder. It has four attacks: a standard attack, a strong side attack, a side smash attack, and a dash attack. When doing a side smash attack, the beam sword's blade grows to three times its normal length--that's the best reach of all battering weapons.

Sakurai stated that "for the first time in the Smash series, Beam Swords will feature graduated colors". It also appears the Beam Sword will strike with combos for neutral slashes

The Beam Sword in Super Smash Bros. for Nintendo 3DS and Wii U 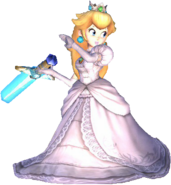 Retrieved from "https://supersmashbros.fandom.com/wiki/Beam_Sword?oldid=583949"
Community content is available under CC-BY-SA unless otherwise noted.