watch 01:53
Bayonetta in Super Smash Bros.
Do you like this video?

This article is about Bayonetta's appearance in Super Smash Bros. for Nintendo 3DS and Wii U. For other uses, see Bayonetta.

Atsuko Tanaka
ベヨネッタ Bayonetta is the seventh and final downloadable character in Super Smash Bros. for Nintendo 3DS and Wii U, as well as the seventh Third Party character to appear in the series, following Solid Snake, Sonic the Hedgehog, Mega Man, Pac-Man, Ryu, and Cloud Strife (and sixth in Smash 4). She was revealed alongside Corrin during the Super Smash Bros. - Final Video Presentation on December 15th, 2015.

She currently ranks 1st on the tier list. Her high status is due to her potent combo game, with moves that easily chain into others and can lead to zero-to-death combos. In addition, she possesses numerous approach options with Bat Within and Witch Time, zoning options with Bullet Arts and Bullet Climax, and a flexible recovery. However, Bayonetta's ground attacks have high startup and ending lag, and her lightweight status makes it relatively easy for opponents to KO her.

Regardless of her flaws, Bayonetta's strengths have led to many successful tournament results, with her presence going to the point of being banned.

Bayonetta is a Bait & Punish and a Mix-up character. Much like Ryu, she is very combo oriented and an agile fighter. However, she specializes in aerial combos, with many multi-hit attacks that can chain into each other. Her Special Attacks play a very important part into this, as they lead to a huge amount of setups.

Bayonetta is notable for her unique mechanic, Bullet Arts, where she can extend and/or cancel her combos by holding the attack button during her moves, canceling the animation and causing her to shoot bullets from her guns on both hands and feet.

She can fire up to five bullets depending on how long the button is held, dealing roughly 1% per bullet. The bullets cause no hitstun but a small flinch, and are imbued with transcending priority, meaning they cannot clash or collide with other attacks and projectiles.

As for her combos, she has a lot of flexibility and versatility. While none of her Tilts have particular strength for KO'ing, they launch the opponent upwards, allowing Bayonetta to quickly integrate her approach into the air. Once the opponent is launched, she has a high number of options to deal with opponents, specially with her Up Special, Witch Twist, and Side Special, After-Burner Kick, both capable of carrying opponents near the upper blast line easily. Down Tilt is notable for having decent range and speed, as well lowering her hurtbox enough to dodge some projectiles and attacks; it sets up combos for nearly all her Aerial arsenal as well as Smash Attacks.

Her Aerial Attacks is where she truly shines. Neutral Aerial is an excellent combo stater and great spacing too, being her fastest aerial attack, with very little ending lag and almost no landing lag, as well a surprisingly large hitbox that even allows to hit enemies below her.

Forward Aerial lifts Bayonetta slightly when connecting with an opponent (even if it hits their shield), and the first or second hit can be cancelled into each other or other Aerial Attacks, and even Smash Attacks if used on short-hops, being her most reliable and safe aerial, great for gimping.

Back Aerial is very powerful as a finisher and for edge-guarding, while Down Aerial is the strongest in the game when used against grounded opponents, being even more powerful than Ganondorf's; it is also a powerful Meteor Smash if it connects with the tip of her heel, the ending lag can be cancelled into jumps or Witch Twist. Lastly, Up Aerial is very useful for frame traps if extended into Bullet Arts, and is a good juggling tool.

As for her Smash Attacks, she is known for having the largest Smash Attacks in the game, with gigantic hitboxes and high number of active frames. All her Smash Attacks involves her summoning the infernal limbs of Madama Butterfly, which are powerful disjointed hitboxes, meaning that hitting the limbs won't hurt Bayonetta. Her Down Smash is notable for being a powerful Meteor Smash, being extremely powerful for edge-guarding. Her Up Smash has the second highest range of all Up Smashes, after Palutena's, and it is her strongest Smash Attack.

Her Special Attacks are all versatile, granting her high flexibility. Bullet Climax can rack up damage really quickly, is very fast and inflicts enough hitstun to frustrate some opponents with poor recovery; Bayonetta can also charge for stronger initial shots, and cancel the charge into shield and side-dodge.

Her ground Side Special, Heel Slide, is essential for start many air combos (much like Cloud's Down Tilt); while the aerial version, called After-Burner Kick, complements her combo game, being able to be used twice in succession and reversed; in addition, holding down right before it causes Bayonetta to dive-kick instead, and bounces on opponents even if they're shielding.

Witch Twist is notable for being the only Up Special other than Yoshi's that can be used more than once in there air before touching the ground, though this can only be done by using the move, jumping, and using it again, something that greatly aids her recovery; the move will always send opponents in front of Bayonetta regardless of how it connects. Lastly, Witch Time is one of the best counterattacks in the game, playing a key-factor in some of her KO setups, as the slowdown effect leaves opponents very vulnerable for charging Smash Attacks.

Bayonetta's flaws, however, are very notable as well. Much like Zelda and Rosalina, she is tall and light, which makes her easy to KO, which, aided by her difficult recovery, can make her very easy to exploit. Many of her attacks have high startup and ending lags, and she has increased landing lag the more attacks she connects in the air, making her overall very easy to punish. Unlike Ryu, who is a combo oriented character with very options for KO'ing, Bayonetta lacks variety in KO moves, mostly relying on Smash Attacks, Back Aerial and Down Aerial; while she has a handful of zero-to-death combos, they are not completely guaranteed depending on the opponent's DI and weight.

Because of that, she tends to be a bit too dependent on Witch Time to KO, which has a diminishing return, becoming less effective the more it is used. Also, she lacks any guaranteed combos out of Throws, and none of them (outside of her Forward Throw) are capable of KO'ing. Lastly, her recovery with Witch Time is very poor unless the player extends it through Witch Twisting, jumping and Witch Twisting again; this also leaves her very vulnerable and easy to gimp.

Overall, Bayonetta is a very flexible character with her huge variety of combos, however her weaknesses are very easy to exploit, forcing players to be careful and patient, relying mostly on punishes, reads, and mix-ups.

Bayonetta can extend any of her ground and aerial attacks into Bullet Arts. If the button is held during an attack, Bayonetta's combo will be broken and she will shoot bullets from her guns, shooting up to ten times. Each bullet deals roughly 1% damage, and have very long reach.

The bullets functions very differently from standard projectiles, instead being more like disjointed hitboxes; they only make opponents flinch at point-blank range, much like Fox's Blaster, meaning they have transcending priority, but cannot be reflected. For instance, Link's and Toon Link's Hylian Shield, and any reflectors are completely ineffective. The bullets are also capable of piercing through multiple people at once, meaning they will hit anyone or anything in their path, not just those closest to Bayonetta.

Bayonetta activates Bat Within automatically when she is struck by an attack at the very beginning of a roll, sidestep, or air dodge, or when activating Witch Time too late. When activated, she will transform into a flock of bat and halve the damage received before moving in the direction she was originally going, though this applies to rolls and air dodges only, as activating it while in a sidestep or Witch Time will simply have Bayonetta remain in place.

While Bat Within makes Bayonetta have the most effective dodging game, it possesses some ending lag, and is less effective against multiple-hitting long-lasting attacks, making her vulnerable to extended combos and punishes. Because Bat Within functions like a passive counterattack, it cannot trigger against grabs, Final Smashes, or unblockable attacks.

Bayonetta uses the Wicked Weaves for her Smash attacks, summoning the limbs of the Infernal Demon Madama Butterfly.

Bayonetta is unique as all her taunts can be cancelled due them being very long, since she dances. 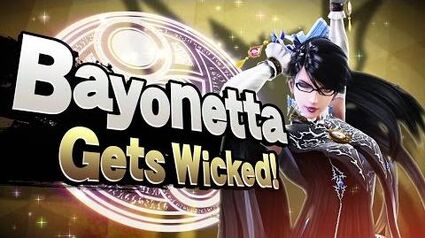 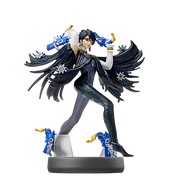 Bayonetta amiibo in the packaging 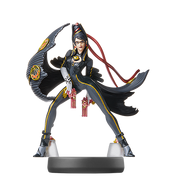 Bayonetta - Player 2 amiibo in the packaging

Bayonetta along with Kirby and Cloud.

Bayonetta riding on a Warp Star.

Bayonetta along with Sonic.

Bayonetta along with Zelda.

Bayonetta along with Toon Link and Palutena

Bayonetta along with Fox

Bayonetta along with Mario

Bayonetta along with Luigi

Bayonetta along with Peach, Link and Fox.

Kirby with Fox and Bayonetta feeling dizzy.
Add a photo to this gallery

Retrieved from "https://supersmashbros.fandom.com/wiki/Bayonetta_(Super_Smash_Bros._for_Nintendo_3DS_and_Wii_U)?oldid=598135"
Community content is available under CC-BY-SA unless otherwise noted.