Atsuko Tanaka
Bayonetta (ベヨネッタ, Beyonetta?), real name Cereza, is the protagonist and main character of the Bayonetta series, developed by Platinum Games and published by Sega and Nintendo. She is the second Sega representative in the Super Smash Bros. series, alongside Sonic the Hedgehog. She is the seventh third-party character, following Solid Snake, Sonic the Hedgehog, Mega Man, Pac-Man, Ryu and Cloud Strife. Bayonetta debuts as a DLC fighter in Super Smash Bros. for Nintendo 3DS and Wii U' and returns as an unlockable fighter in Super Smash Bros. Ultimate.

Bayonetta is a coquettish and mysterious Umbra Witch, who possesses a remarkable talent for the Bullet Arts and is the bearer of the Left Eye, that oversees the darkness.

In the first game, after a 500 year slumber in a coffin submerged at the bottom of a lake, Bayonetta battles against the angelic hordes of Paradiso in order to discover the truth about her past and what she has forgotten during her sleep. In the sequel, Bayonetta now fights to rescue Jeanne, her clan sister who was taken to the realm of Inferno. With the help of Rodin, her demonic weaponsmith and proprietor of The Gates of Hell bar, she is hounded endlessly by hosts of angels along the way. 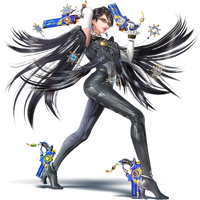 Bayonetta appears as a downloadable newcomer in Super Smash Bros. for Nintendo 3DS and Wii U, being the seventh and last character announced. She was chosen by fans using the Smash Bros. Fighter Ballot, placing first in Europe and being among the top 5 in America, making her the overall #1 choice worldwide among "realizable and negotiable" characters. Her main appearance is based of her design in Bayonetta 2, with her design from the original Bayonetta being available as an alternate costume, as well a palette swap based on the colors of her partner and fellow Umbra Witch, Jeanne. She was confirmed during the Super Smash Bros. - Final Video Presentation on December 15th, 2015, and was released on February 3rd, 2016.

Bayonetta's playstyle involves the mechanics of her home series, such as Bullet Arts that allow her to pelt opponents from a distance with invisible bullets after any attack, and Wicked Weaves that involves using her hair to summon Madama Butterfly for enormous punches and stomps during her smash attacks. Bayonetta's fighting style mostly involves heavy use of combos, although she specializes in chaining aerial attacks. However, to compensate for her strengths, her ground attacks have slightly more startup than most standard attacks, her aerials gain landing lag after each successful chained combo, and her smash attacks are slow and have low priority compared to their size. Another reference from her home series is that if she gets hit before the invincibility frames of any dodge, she will activate Bat Within, in which she briefly transforms into a swarm of bats to dodge and causes her to receive half of original damage of an attack.

Bayonetta
Bayonetta is one of the last of the near-extinct Umbra Witches clan. She's a master of the Bullet Arts and can use her hair as a conduit to bring forth Infernal Demons. She brings all these skills and more to Smash, where she'll unleash additional damage if you hold the attack button. Damage and distract your foes with this move!

Bayonetta (Alt.)
If you use Bayonetta's side special in midair, she'll do a diagonal kick upward that goes through platforms. If you press down just before doing the move, it'll turn into a downward attack! Plus, if you hit an enemy in midair, you can use the attack again before you hit the ground–great for combos and recoveries!

Bayonetta (Original)
This Umbra Witch awakens after hundreds of years without any memories of her past life. Usually Bayonetta spends her days pretending to be a nun to lure out angels, until a witch with the same powers as her starts to slowly bring her memories back. She ends up embroiled in a battle to save the world.

Cereza
A small girl Bayonetta finds wandering the stronghold city of Vigrid with her stuffed toy, Chesire. For some reason, Cereza is convinced Bayonetta is her "mummy" and wants to be just like her. No human should be able to see angels, but somehow Cereza can... 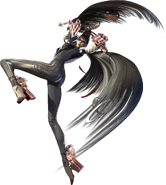 Bayonetta's appearance in Bayonetta which is used in four of her alternate costumes in Super Smash Bros. for Nintendo 3DS/Wii U.

Art for the 1st game