This article is about Battlefield in Super Smash Bros. Brawl. For other uses, see Battlefield (disambiguation).

Starter/Counter
Battlefield (戦場, Senjō?) is a starter stage and returning stage in Super Smash Bros. Brawl. It was the very first stage introduced at E3 2006, and is described by the DOJO! as the most basic stage.

Battlefield's layout is very similar to that of its Melee counterpart—it consists of a central hard platform with ledges that may be hung from, and three stationary soft platforms that float above the hard platform. The stage elements are larger than those of Melee's Battlefield, and the blast lines that surround them are situated further away. The slopes on the stage's underside, beneath the ledges, can be "hugged", allowing many characters to more easily and more flexibly recover from offstage.

Unlike Melee's abstract and plain design, he visual design of Brawl's Battlefield involves recognizable and natural elements such as foliage, stone structures, and a landscape background, The stage cycles through different times of day, each with its own distinct background visuals and light. Unlike Smashville, the cycle does not reflect the actual time of day in reference to real time. It instead begins in its morning state, then progresses through daytime, evening, night and dawn phases, and returns to original morning state after four minutes. The stage's central platform features a sundial with a shadow that changes with the stage's time of day.

Battlefield has always been a tournament legal stage in competitive play, in accordance with the Smash Back Room's tournament ruleset. It's often considered one of the fairest stages in the game as there are no stage hazards. 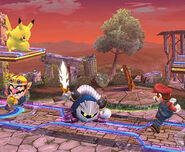 Mario, Pikachu, Wario, and Meta Knight fighting on Battlefield in the Evening 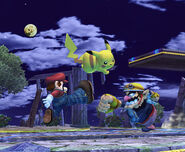 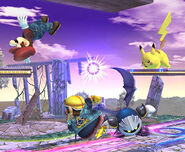