This article is about Banjo & Kazooie appearance in Super Smash Bros. Ultimate. For other uses, see Banjo and Kazooie.

Banjo-Kazooie is a newcomer in Super Smash Bros. Ultimate. They were revealed at the Nintendo Direct shown at E3 2019, alongside Hero. Their fighter number is 73.

Banjo & Kazooie were initially met with a mildly positive reception due to their strong and flexible moves (such as forward aerial, forward tilt, smash attacks, Wonderwing, and Rear Egg), their ability to zone and edge trap effectively, and their versatile recovery. Their viability was strengthened with Tweek's 5th place at Glitch 7 - Minus World. However, the duo's flaws, including their below-average speed, problems with juggling and scoring KOs, fairly noticeable lag on their moves, and a barely adequate grab game, quickly became a problem. Despite their flaws and Tweek dropping the duo almost immediately after Glitch 7, opinions on Banjo & Kazooie's viability remained somewhat positive, as they garnered a sizeable playerbase that included huto, Raito, and Trela, the latter of whom defeated VoiD at The Big House 9. As a result, the early consensus among professionals, such as Mew2King and ESAM, was that the duo was between mid tier and the lower end of high tier.

However, ever since the end of 2019, Banjo & Kazooie have seen a decline in both results and reception, with several players such as the aforementioned 3 dropping them. Many players believe that they are only at their strongest in an online environment, while others believe that they are low tier overall. While Banjo & Kazooie are generally considered a respectable fighter, their viability as a solo main is widely disputed due to their competitive results being quite lacking compared to metagame-relevant fighters.

Banjo & Kazooie's Classic Mode comprises opponents featured as a duo, akin to themselves being partners. Several of the music and stage combinations reference various worlds from the first Banjo-Kazooie game. 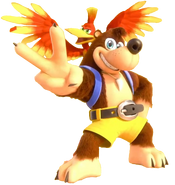 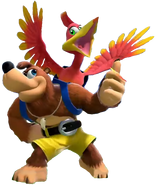