Smashpedia
Register
Don't have an account?
Sign In
Advertisement
in: Attacks, Special Attacks, Side Special Moves,
and 2 more

Back Slash (バックスラッシュ, Back Slash?) is Shulk's Side Special Move. Shulk leaps forward, slashing with the Monado downward, inflicting more damage if striking from behind.

Back Slash grants a small jump while initiating, making it useful for jumping over small projectiles. It does grant some horizontal movement, but is risky for recovery as Shulk can grab the ledge while using Back Slash, although it requires a long falling distance for this to come into effect. Because of this, as well as the move's inability to be cancelled, Shulk will inevitably self-destruct if Back Slash is used off-stage.

The move does around 7% to 9% if used against enemies that are facing Shulk, but can deal between 11% to 16% when striking behind them. The damage on a back-hitting Back Slash is increased to 22% with high shield damage while in Buster mode, and is a reliable KO option in Smash mode, KOing at around 90% at the back (middle of stage) and 118% at the front (near the edge).

Back Slash is a useful move for avoiding low projectiles, as well as a good punishing move. As the name implies, it is an effective sneak attack against unaware opponents. However, Back Slash also has high ending lag, making it very unsafe if shielded and leading Shulk to be punished. 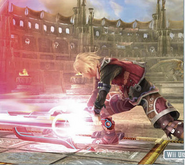 Shulk begins to attack King Dedede from behind.

Back Slash Leap is one of Shulk's Side Special Moves that can be used via customizations. Shulk leaps higher, slashing with the Monado downward powerfully.

Back Slash Charge is one of Shulk's Side Special Moves that can be used via customizations. Shulk leaps forward, slashing with the Monado downward. The move has Super Armor frames in the whole move.

Back Slash was one of Shulk's Physical Arts in Xenoblade Chronicles; he performed a simple strike which did extra damage when used from behind.