Axew (Japanese: キバゴ Kibago) is a Dragon Pokémon from the Pokémon universe.

Axew appears in Super Smash Bros. for Nintendo Wii U on the Kalos Pokémon League stage as a background character.

NA: Axew may look like it's brought its dinner with it, but those things in its mouth are actually tusks! It can mark its territory with them or crush berries for a tasty meal. All that wear and tear on them can sometimes break them off, but don't worry! If Axew loses a tusk, it'll grow back quickly and even stronger than before.

PAL: No, that's not some delicious snack poking out either side of its mouth - those are tusks. Axew uses them to break through the hard outer shells of its favourite fruits and to carve territorial markings on trees. Occasionally, its tusks can break, but they just grow back stronger than before. 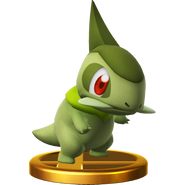 Axew's Trophy
Add a photo to this gallery
Retrieved from "https://supersmashbros.fandom.com/wiki/Axew?oldid=546715"
Community content is available under CC-BY-SA unless otherwise noted.