Lucario initiates Aura Storm by saying "Watch the power of Aura!" before flying off to the top of the stage, knocking over any opponents in his way, meteor smashing any opponent below him. Lucario will reappear at the center of the stage and fire off a massively powerful beam of Aura that goes through the stage. Any opponent caught in the blast will be trapped and dealt minor damage. While firing, the player can angle Aura Storm's direction to catch untouched opponents, though it can potentially free trapped opponents. After some time, Lucario will end Aura Storm with a more powerful beam of Aura that deals high knockback and damage.

Due to Aura Storm being affected by Aura, it deals more damage and knockback the higher Lucario's damage is. When Lucario is at 170%, the takeoff deals 28% damage, and the main attack deals 78% damage, making Aura Storm have a maximum output of 105% and being a guaranteed OHKO against most opponents ( AKA brutally murdering any unfortunate victims).

Aura Storm is effective at pressuring opponents to make evasive actions and a great damage-racker against unaware opponents. However, it can easily be outrun by characters with good vertical recoveries, and the layout of the stage can work in the opponents' favor when evading. In order to be truly effective, Lucario must be at a relatively high percentage, so players must be cautious about where to activate Aura Storm, otherwise opponents can wait at his position and knock him out.

In Ultimate, Lucario will Mega Evolve first before flying off to perform this move. 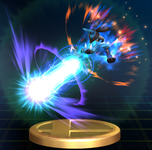 Lucario's Final Smash. After flying off the screen, Lucario reappears in its center. It then launches a powerful Aura attack against all foes within a certain distance. The key to this attack is the ability to change its angle--it's a must sweep slowly left and right to hit selected enemies multiple times. The last blow will send the victim flying away.

"Aura Storm" is not an actual attack in the Pokémon series. However the attack resembles the Hyper Beam, a powerful move that most evolved Pokémon can use, including Deoxys and Lucario itself. The manner in which the attack is used also resembles the Kamehameha from the Dragon Ball franchise, which was a signature attack of Goku. Coincidentally, the Lucario in Pokemon: Lucario and the Mystery of Mew is voiced by Sean Schemmel, who also voices Goku.