Ashley as she appears in WarioWare: Get It Together!

Ko Takeuchi
Ashley (アシュリー) is a recurring character in the WarioWare series, acting as the host of her own set of microgames.

She joined Super Smash Bros. for Nintendo 3DS and Wii U as a summonable Assist Trophy, and later returns for Super Smash Bros. Ultimate. A Mii Fighter Costume modeled after her hair and clothes is also available as DLC in the former game.

Ashley is a young witch who lives in a haunted mansion located in Diamond City. Outwards, she is a serious and temperamental young girl with an inflated ego, and is often very cold and hostile towards others. However, this is merely a front for her true personality (as explained in her theme song), because in actuality she has crippling shyness and would love to make friends, something that has been hinted at multiple times throughout the WarioWare series; for example, in WarioWare Gold, she is seen blushing after playing cards with the other employees in the Potluck Gang stage, suggesting she greatly enjoyed her time. She does have one constant friend, being Red the Imp; he often acts as her trusted assistant, usually doing all of her schoolwork and chores for her due to her bouts of laziness. Most of Ashley's time is spent on practicing her witchcraft, as she can cast spells with her wand and use potions; however, despite the braggadocios nature of her theme song, its actually suggested that she's a mediocre magician, with Game & Wario stating that she's successful at casting spells "40% of the time".

As she is a witch, the stories in her set of microgames all revolve around magical elements. In her debut in WarioWare: Touched!, she is trying to make a new potion and orders Red to capture Orbulon, as he is the final ingredient in her witch's brew. In WarioWare: Smooth Moves, Ashley is assissted by the Chatty Mr. Spell Book to practice her spells by trying to grow a plant. In WarioWare D.I.Y., Ashley (along with Jimmy T, 9-Volt, Orbulon, and Mona) have all left WarioWare, Inc. to work for Diamond Software for unknown reasons; Ashley is also seen owning a mask store that lets the player know how well they completed a boss microgame. In Game & Wario, Ashley accidentally transports herself into a page of a book full of candies and sweets, and the player must help her escape in a shoot-em-up stage. In WarioWare Gold, Ashley helps the demon Gahrumble defeat another demon named Hum Gree, who has been eating all of the food in the demon realm; she later appears in the Potluck Gang stage partaking in a camping trip with the rest of the WarioWare, Inc. employees. In WarioWare: Get It Together!, after getting sucked into Wario's game, Ashley initially decides to stay as she likes what the game bugs have done to her stage; in its scenario, Ashley & Red grow hungry in their mansion but are suddenly ambushed by Mandrakes. After beating the stage, Ashley reluctantly joins Wario's crew, simply stating "Whatever".

Ashley's theme song, "Ashley's Song", is available in both English and Japanese. It can only be played on WarioWare, Inc.

Ashley appears as a summonable Assist Trophy. When she appears, she will reside in the background and create a magic cloud around her with her wand, surrounding herself with an area of effect. Any opponents caught in the cloud will begin to take damage and move slowly, as well as succumb to other adverse effects such as turning invisible, making Food harmful, and negating Up Specials (much in the same way as Negative Zone from Brawl). As Ashley only resides in the background, she cannot be attacked or interacted with.

Ashley‘s trophy is a blue item that can be acquired during Smash Tour. If used, it will slow down the speed of the spinner, making it easier for the player to roll a desired number.

A costume for the Mii Swordfighter modeled after Ashley was made available as a part of the Wave 6 batch of DLC costumes. The sword it uses is Red's magic wand form.

This young witch-in-training lives in a haunted mansion in Diamond City. She's shy and quick to anger, but secretly she wants more friends. When she appears on the battlefield, she will summon a damaging zone of darkness around her. The zone causes a variety of effects, none of them good.

Who's the girl next door living in the haunted mansion? You'd better learn her name, 'cause she's Aa-ashley! This little witch loves cursing people, but also wants more friends. Talk about wanting to have your cake and eat it, too... In battle, she conjures a zone of darkness that both damages and shrinks other fighters!

Ashley returns as an Assist Trophy with no noticeable functional changes, although she now sports her red eyes from WarioWare Gold. The Mii Fighter Costume modeled after Ashley also returns, now as part of the base game. The outfit is available by default, but the hat must be purchased separately at the in-game Shop for 450G. All variations of "Ashley's Song" also return, now available in all regions. 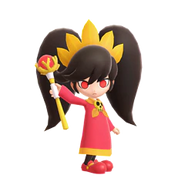 Ashley as she appears in Ultimate 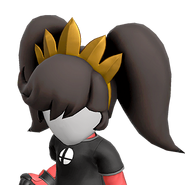 A Spirit of Ashley is available in the base game. It is a Support Spirit in the Legendary class. Her Spirit Battle uses a Mii Swordfighter wearing the Ashley costume, and is assisted by a tiny Ridley (meant to represent Red). They are also assisted by Ashley herself, and the controls of the match will be reversed. The stage is WarioWare, Inc. and the song that plays is fittingly Brawl's remix of "Ashley's Song". The Ashley Spirit can also be summoned by using the Spirit Cores of Charlotte Aulin, Star Rod, any Primary Neutral Spirit, and any Support Spirit.