The Arena Ferox stage is a flat, medium-sized stone platform with at first has nothing on it. During the course of the fight, it will change, adding new platforms to the stage. The various structures consist of:

The building style is similar to the ancient amphitheatres in the Ancient Roman Empire. The arena is lower than the seating area, and surrounded by high walls.

Arena Ferox comes from the Nintendo 3DS game Fire Emblem: Awakening. It is a gladiatorial combat arena located in the nation of Regna Ferox, a warrior nation that lets combat strength dictate all of its politics, and the khans of the nation regularly use it to determine their future successors. Early in Awakening, the main character, Chrom, traveling from the halidom of Ylisse to the south, must fight in this arena to earn the support of the Feroxi in Ylisse's future dealings with recent threats to the continent, and his opponent is a masked sword-wielder named after Marth, the legendary hero of the distant past. 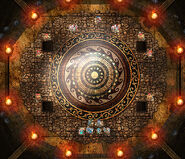 Arena Ferox as it appears in Fire Emblem: Awakening.

The Omega form of Arena Ferox.