Arceus (アルセウス, Aruseusu?) is a Normal-type legendary Pokémon that appears in the Pokémon Universe. It appears as a Master Ball Pokémon in Super Smash Bros. for Nintendo 3DS/Wii U. It performs the move "Gravity".

Arceus rears up on his hind legs and then stomps back down, which causes a wave to ripple out, meteor smashing all opponents hit by it in mid-air. Arceus does this several times before disappearing again, giving the summoner the chance to knock his opponents in the air. Characters on the ground are not affected by this move.

A Pokémon said to have hatched from an egg that appeared from nothing. Newly hatched, it created the world and the sky. Its Gravity attack will bring any fighter in midair crashing down to earth. No ground below you? Looks like you're going to go plummeting off the stage as if you'd been hit by a meteor smash!

Arceus reprises the same attack pattern from the previous game and also appears as a collectible Spirit in Super Smash Bros. Ultimate.

Arceus as it appears in the game. 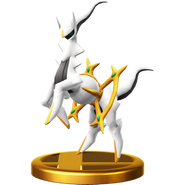 Arceus' Trophy in Super Smash Bros. for Wii U
Add a photo to this gallery
Retrieved from "https://supersmashbros.fandom.com/wiki/Arceus?oldid=592041"
Community content is available under CC-BY-SA unless otherwise noted.