Album is a mode included in Vault where players can see stored pictures they have taken from matches or other modes. To take a photo, the player must pause during a fight and press the Z button on the GameCube Controller and Nunchuk, ZR button on Classic Controller, and A button on Wii Remote to take the photo, much like Camera Mode in Melee.

Photos can also be taken in Adventure Mode, as well as most other modes, but not during cutscenes, Home Run Contest, Training, Target Smash!!, Multi-man Brawl or Wi-Fi matches. However, players can still save taken snapshots from replays of battles.

Players can also take pictures of Trophies that have been arranged in Diorama Mode or Stickers, and send them to friends via WiiConnect24. For some reason, Snapshots usually cost more Points to share than anything else. 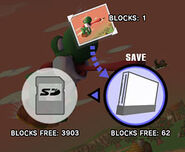 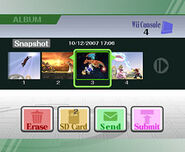 A view of saved snapshots in the Album.
Community content is available under CC-BY-SA unless otherwise noted.
Advertisement