Shin'ichirō Miki
Akira Yuki (結城 晶/結城 アキラ, Yūki Akira) is a character and mascot of Virtua Fighter series. He has made a couple of appearances in the Super Smash Bros. series, the main one being an Assist Trophy in Super Smash Bros. Ultimate.

He appears as a downloadable Mii Costume, released on June 14, 2015.

He appears as an assist trophy, with a very polygonal design from the original Virtua Fighter than the current red and blue ones from Virtua Fighter 5. He will approach fighters and attack by grabbing fighters and slamming into them as well as blocking physical hits, such as Tetsuzanko. 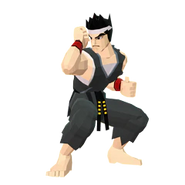 Retrieved from "https://supersmashbros.fandom.com/wiki/Akira_Yuki?oldid=600963"
Community content is available under CC-BY-SA unless otherwise noted.