Agility (こうそくいどう, Kōsoku Idō?, lit. "High Speed Movement") is Pichu's Up Special Move. When performed, Pichu will make a quick teleport-like action in any direction. Inputting another direction during this first teleport allows Pichu to immediately perform a second teleport upon finishing the first.

Unlike Pikachu's Quick Attack, any enemy caught at the mid or end point of these teleports will not be dealt any damage, but Pichu will be dealt 1% damage for the first teleport, and 3% if it uses the second teleport.

Agility has 1 frame of lag if Pichu correctly, making it the most lagless recovery move in Melee, but if messed up, it will have 14 frames of lag. This allows to quickly jump and use the move, then inputting another attack. 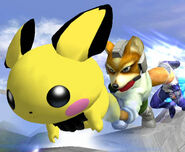 Pichu using agility to outrun Fox and Sheik, two of the fastest characters in Melee.
Add a photo to this gallery

Retrieved from "https://supersmashbros.fandom.com/wiki/Agility?oldid=471159"
Community content is available under CC-BY-SA unless otherwise noted.