Aether(天空 Tenkū, lit. "Heavenly Sky") is Ike's Up Special Move. Ike throws Ragnell upward, jumps to catch it, and comes down with a downward slam. Chrom also has a similar move as Ike’s Aether, in this case Soaring Slash.

Aether functions identically to Final Cutter, as Ike jumps into the air before coming back down. It grants minimal horizontal distance, but decent vertical distance. In addition, it possesses Super Armor when Ike throws Ragnell upwards, making it possible to survive certain moves such as Critical Hit. If used up close, the opponent will be trapped in all hits. Aether also possesses a Meteor Smash when falling.

As a recovery, Aether is Ike's primary means of vertical movement, though it is subpar in comparison to other moves. However, as an offensive option it is a powerful edgeguard due to its Meteor Smash capabilities, especially if used on an edge, and possesses good vertical reach when throwing Ragnell upwards, making it easy to catch aerial opponents, prevent edgeguarding, and interrupt attacks due to being a disjointed attack. However, it cannot be cancelled once initiated unless landing on a ledge after reaching the apex, making it a risky option when off-stage with no ledge close by. 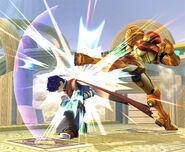 Ike being unaffected by Samus's forward tilt during Aether's startup 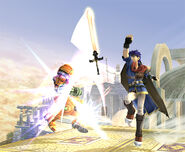 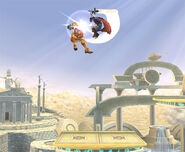 ...then jumping up and starts spinning... 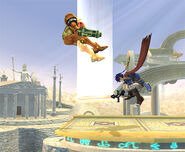 ..then falling.
Add a photo to this gallery

In Super Smash Bros. for Nintendo 3DS and Wii U, Aether can be customized into Aether Drive or Aether Wave.

Aether Drive has Ike throw his sword up diagonally, jump to grab it, and then swing it on the way down. This significantly increases his horizontal recovery.

The Aether Drive custom variation is better for horizontal recovery because the sword is thrown diagonally upwards rather than vertically; however, this makes it more difficult for all of the hits of the move to connect, and they only do so within a certain damage range. The move can still SD and because Ike moves forwards much more with this move, using it near an edge or using it too far from an edge can result in an SD. This also makes it poor for edge-guarding as Ike must space himself carefully from the edge or risk SDing. At high percentages, over 150%, the initial hitbox of Ike hurling the sword can kill opponents off the ceiling of the stage.

Aether Wave creates a shock wave when hitting the ground, similar to Kirby's Final Cutter, but it's less powerful than normal.

The Aether Wave custom variation works more like Kirby's Final Cutter, sending out an energy wave across the ground upon landing. As the sword is thrown upwards it will launch opponents horizontally and the energy wave will also hit opponents away from Ike, which makes it a good edge-guarding move especially against characters with poor recovery like Little Mac and Captain Falcon. Since the move launches opponents horizontally, it will not meteor smash opponents. As a recovery it isn't the best; it has less horizontal influence than the default, to the point where there isn't any at all. It is executed faster, but when the move already has Super Armor speed isn't going to be that big of a factor in helping to prevent gimps.

Aether Wave
Add a photo to this gallery

Aether is Ike's iconic Mastery Skill which is available once Ike promotes in the games that he appears in the Fire Emblem series of video games. It is described as a combination of the Mastery Skills: Sol and Luna. In both games Ike appears in, it involves throwing his sword upward, jumping, catching it, and coming down with a spinning cut that heals Ike equal to the damage inflicted (the effect of Sol), followed by a second rising strike that is performed as Ike puts space between himself and his opponent, which halves/ignores the foe's Defense score (the effect of Luna in Path of Radiance/Awakening and Radiant Dawn respectively). However, neither effect is applied to Aether in Brawl, and the second strike is omitted completely.

Aether would later be available to the new Lords of Fire Emblem: Awakening, Chrom and Lucina when they become Level 5 Great Lords. Though the attack properties are the same as Path of Radiance, the animation is not the same as its Tellius version. Ike appears in the game as a SpotPass and DLC character wielding Aether only during the battle.

Retrieved from "https://supersmashbros.fandom.com/wiki/Aether?oldid=567891"
Community content is available under CC-BY-SA unless otherwise noted.