An aerial attack is any attack that is performed in midair that is not a special move. Their official terms vary between titles; they are known as "Midair Attacks" in Super Smash Bros. Melee, and "Air Attacks" in Brawl. Aerial attacks play an especially large role in competitive play because they can be L-canceled and can be performed after a short hop, greatly reducing their lag and start-up time as compared to ground attacks. Most aerial attacks deal moderate damage (9%-14%-ish). 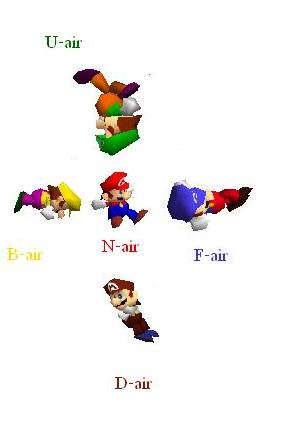 Aerial attacks include the:

Gliding characters also possess a glide attack, which is used when attacking out of gliding.

Also, characters with a Tether Recovery or a Wall-grapple usually possess an extra aerial attack, which is used by pressing the grab button.

Retrieved from "https://supersmashbros.fandom.com/wiki/Aerial_attack?oldid=473416"
Community content is available under CC-BY-SA unless otherwise noted.