Abomasnow (ユキノオー, Yukinoō?, "Yukinooh" in the original Japanese version) is a Poke Ball Pokemon in Super Smash Bros. (Wii U and 3DS).

Abomasnow is a unique case in that it always uses two moves: Blizzard, which creates a tornado of freezing wind and snow around it, and Ice Punch, which both freezes foes and sends them flying.

NA: A solitary Grass/Ice type, Abomasnow loves to live in the snowy mountains, though it occasionally mingles with people as well. In Smash Bros., it uses a combo of Blizzard and Ice Punch, punishing anyone who gets too close. It can change direction when attacking, so sneaking up on it from behind won't work!

PAL: Abomasnow is a Grass- and Ice-type Pokémon said to live the quiet life in snowy mountains, but it's been known to mingle with humans too. It can whip up blizzards to attack anyone who strays too close, and it can throw a powerful Ice Punch either straight in front of back over its shoulder, so there's nowhere to hide! 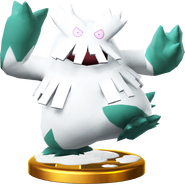 Add a photo to this gallery
Retrieved from "https://supersmashbros.fandom.com/wiki/Abomasnow?oldid=547409"
Community content is available under CC-BY-SA unless otherwise noted.