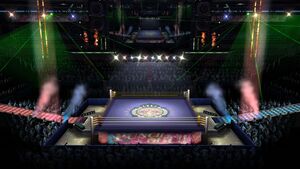 The Boxing Ring (特設リング, Tokusetsu Ringu?, "Special Ring") is a stage appearing in Super Smash Bros. for Nintendo 3DS and Wii U. This stage originates from the Punch-Out!! Series, but it has an alternate version, where it is themed for the Super Smash Bros. series.