Waluigi first entered the Mario universe when he was created out of necessity as being Wario's partner in Mario Tennis 64. He was not created by a Nintendo employee, rather a Camelot employee, Fumihide Aoki. Since then, he has so far only appeared in spin-offs and party games, as opposed to the main platformer titles, save for a few negligible cameos. He's considered to be Luigi's "evil" rival, in the same way that Wario is Mario's "evil" rival. Along with this, Waluigi has a hat and gloves with a "Γ" gamma symbol, which is similar to Wario's "W", which is also an inverse or an upside-down "M". Unlike Luigi's green hat and shirt, Waluigi has a purple shirt and hat with black overalls, while his Γ symbol is yellow. Despite him being close to Wario, he isn't his brother, but are "close friends" as Mario & Sonic at the Winter Olympic Games say. Waluigi is voiced by Charles Martinet, like Wario and both Mario Bros. His favorite weapon is a Bob-omb.

Waluigi is considered to be original to the Mario universe rather than the Wario universe since he has only appeared in Mario spin-offs and is yet to be seen in an actual Wario game.

Waluigi appears as a trophy in SSBM.

This tall, thin, evil-looking guy seems to be Luigi's rival. He works hard at his mischief: Waluigi reportedly spent a lot of time training for his debut in Mario Tennis by honing his ability to antagonize the Mario brothers. While it's general knowledge that he's the same age as Luigi, his relationship to Wario is unclear.

Waluigi appears as an Assist Trophy in Super Smash Bros. Brawl. He has brown shoes instead of his usual orange shoes. When summoned, he dashes at a random opponent on stage and stomps them into the ground (although he can stomp multiple opponents at once if others around are caught in the stomps), in a manner similar to Donkey Kong's Headbutt or the Pitfall. He stomps the victim(s) multiple times before unleashing a finishing blow with his tennis racket or a kick. His kicks spike if the opponent is a little outside the stage. Unless he attacks constantly, his final attack has a pause which lasts about 3 seconds. Also, he is relatively easy to avoid on the stage, but chances are he is going to attack someone once.

Waluigi
A twig-thin man who sees himself as Luigi's ultimate rival. He spent a long time working silently in the shadow of the Mario Bros. before finally becoming strong enough to compete with them in Mario Tennis. Since then, he's had many brilliant game appearances. While the nature of his relationship to Wario is a mystery, the pair have hatched some devious schemes together.

As a color change

Luigi possesses a black and purple color swap which gives him a similar appearance to Waluigi. The L on his hat also changes to yellow, just like Waluigi's inverted L. The L, however, doesn't flip itself like Waluigi's does.

Via the hacking program BrawlBox, hackers have succeeding in replacing the model for the Red Alloy with Waluigi's model. Additional hacks have smoothed out Waluigi's motions and given him some original animations. However, like the Alloy he is replacing, he cannot use special moves or grab ledges. A Youtuber named MarioKing64DS has shown a Waluigi mod with unique special moves and taunts. Earlier versions of the mod had Waluigi replace Pit, but the current version does not. It was released on January 1st, 2016.

Waluigi returns as an Assist Trophy once again, retaining all of the same attacks from Brawl, but he can be defeated if he has taken enough damage from attacks. His cap is also headgear for Mii Fighters.

Luigi still possesses the Waluigi palette swap, but the yellow "L" is now purple. Mario gained a new palette swap based on Waluigi, which better resembles the character due to the "M" being yellow.

A crooked mustache and a long, red nose--Waluigi has "villain" written all over him. He considers himself Luigi's rival. He's cunning and quick. When summoned into battle, he'll rush the nearest fighters and stomp them into the ground--then thwack them with his foot or tennis racket!

Waluigi returns as an Assist Trophy, along with his Mii fighter cap, with the same moveset as in previous titles. Waluigi can be KO'd, earning the fighter who did the final blow a point. 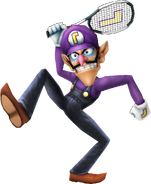 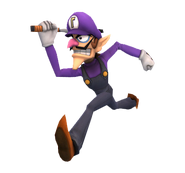 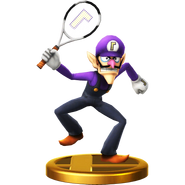 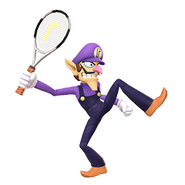 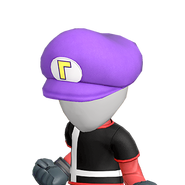 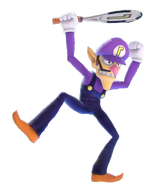 Waluigi coming out of the Assist Trophy 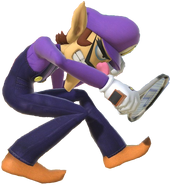 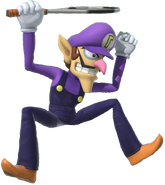 Waluigi falling
Add a photo to this gallery

Retrieved from "https://supersmashbros.fandom.com/wiki/Waluigi?oldid=581597"
Community content is available under CC-BY-SA unless otherwise noted.