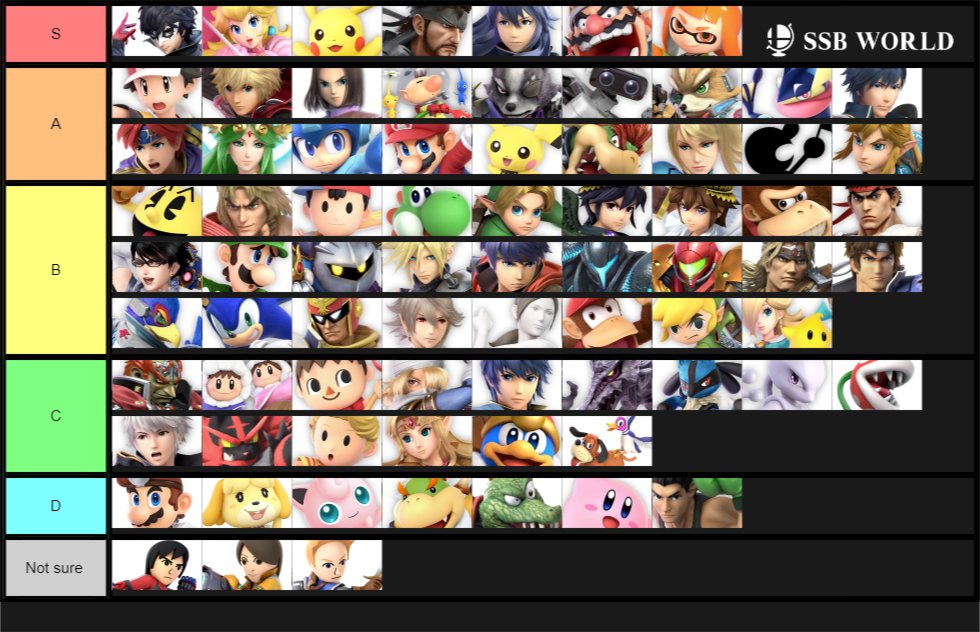 I have finally been able to post this thing. In my original post I explained all my placements, but now I feel like any comments you make on it I can, and will eventually answer.

That being said...B and C tier are "flexible", as in I didn't painstakingly ponder over their every placement. They are relatively ordered and from a glance they look right to me. Top tier and bottom tier, however, are strictly ordered. Yes, I think Piranha Plant is underrated and I think Pac Man is overrated. Pikachu is not the best in the game. Looking back on this now I'd move Wolf up, maybe switch him with PT. So there you go.

What’s with your fetish with Mario?

Alright so that's how it's gonna mother fucking be

I'ma tell you another story

There was once a time when I wasn't a fat rageaholic, depressed fuck

But shit went down motherfucker

He was like "OH I MADE THAT COCKSUCKER DIE"

I never contacted him again

He's in the shit yo

He IS the fuckin' shit

He's the most washout video game character of all time, nothing more than Ninty's cash cow

And I hate people

So I started limiting myself to Mario on every goddamn game

Played only him in every sports title

And he wondered why I only play Nintendo

And that's all there is to hear

That story made me cry.

@The Devilish Iron Warrior Tl;dr I’ll take that as “I’m bonkers and I like Mario thanks”

*sigh* fine I like Mario bc I hate myself, everyone else, and this spinning mudball pisshole we're disprivileged to live on

That short enough for you

I’m not one to tell you how to live, but being a pessimist won’t make it any easier.

DON'T TELL ME HOW TO LIVE